First of all, if you don’t know who Jim Butcher is and you haven’t read any of his previous Harry Dresden novels, this is NOT the place to start. Got that? Start with “Storm Front,” the first of now-13 amazingly entertaining books about the adventures of Harry Dresden, Wizard for Hire. 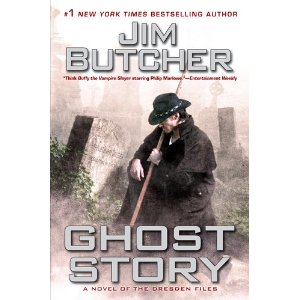 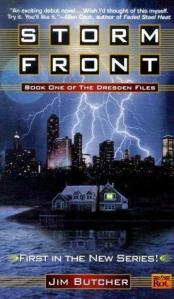 That’s not to say that you have to read all the books, although once you’ve read one I defy you to stop. They’re like the best, most addictive potato chips ever. Compulsively readable. Butcher builds a strong cast of primary and supporting characters slowly through all 13 books, until it seems as if the stories are as much about Michael and Molly, Susan and the vampires, Thomas and the other vampires, Harry’s fairy godmother, Butters and Maggie and Mort and Kincaid and Ivy and Ebenezer and… the list goes on… as about Harry. And of course, they’re all about Chicago cop Karrin Murphy and Bob the Skull. Not to mention Mister the cat and Mouse the temple dog.

I’m reading back over that paragraph and thinking, sheesh, this sounds like just about the most twee thing since the invention of twee. But it isn’t. The cover copy on “Ghost Story” suggests crossing Buffy the Vampire Slayer with Phillip Marlowe, and that’s not far from accurate.

Harry’s a wizard. The supernatural obviously plays a huge part in his world. But you’ll find no Disney fairies or True Blood vampire hunks here. Dresden’s supernatural is vast, tricksy, and might just as well rip you to shreds as talk to you. Dresden himself, the character, pulls all these books out of the slop-bucket of quasi-fantasy crap that’s been sloshed on the SF/F reading world in recent years. Dresden is a loner, a smartass, witty and funny and capable of enormous destruction. He’s kind, will do anything for his friends and often for complete strangers, and he makes mistakes. Oh, boy, does he makes mistakes.

And his mistakes have consequences. Which brings me to “Ghost Story,” the 13th Harry Dresden novel, in which entire coops full of plot chickens come home to roost in Harry’s world. How he deals with the repercussions of past successes, past mistakes, and past failures is a large part of the driving force of the novel. Oh, there’s a standard plot, and it’s a terrific Dresden adventure on its own. But “Ghost Story” is more about reflection. It’s about the time which comes to most everybody, when you stop slogging and pushing and fighting to go forward and suddenly are forced to look back at what you’ve left in your wake. Intentional and unintentional.

Harry Dresden books don’t make me cry. This one did.

So… don’t start out with “Ghost Story.” But if you’ve got time to spare and you’ve been looking for a series that will entertain, enlighten, amuse and sometimes cause you to chew your fingernails, pick up a copy of “Storm Front” and start reading. And when you get done with “Ghost Story,” drop me a line. We can hold cyber-hands and get ready  to move on.

P.S. This feels kinda disloyal, especially after raving about the Dresden books so ardently. But Jim Butcher has another six-book series called “The Codex Alera.” I can’t recommend it. Truth be told, I’ve never managed to finish chapter one of book one. It’s dense and wordy and takes itself too seriously, for my tastes. And I love “The Lord of the Rings,” just to be clear on this. ;D

So Jim Butcher “Dresden Files” series, many many thumbs up.

Jim Butcher otherwise, you’re on your own.